Washington, DC— Today, the House Committee on Natural Resources hosted the first-ever Congressional hearing for the National Museum of the American Latino Act (H.R. 2420). The bill has 218 bipartisan cosponsors, a bipartisan Senate counterpart, and would establish the long overdue Smithsonian Museum on the National Mall dedicated to commemorating the 500 plus years of American Latino contributions to our nation’s military, sciences, economic power, civil rights and the arts.

Longtime supporters of the museum campaign from the arts, business, academia, and federal government came together to call for the creation of this museum at a time when discrimination against the Latinx community have reached dangerous levels. This museum is urgently needed to combat ignorance and show understanding and appreciation of American Latinos in our nation’s history and future. 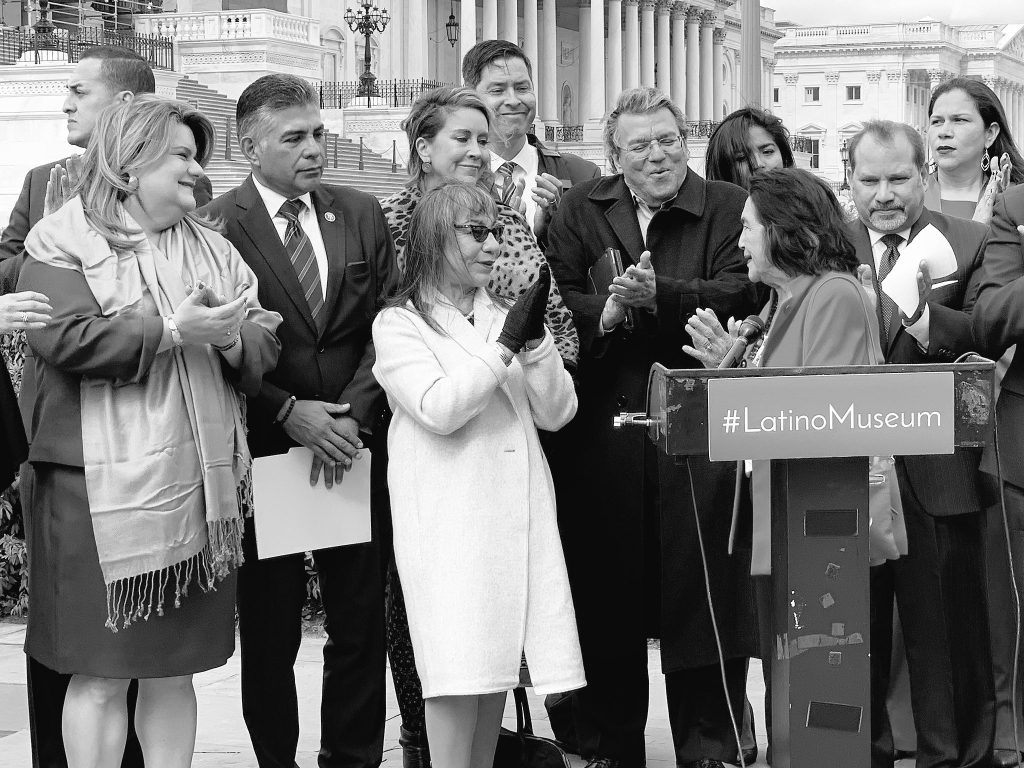 “Latinos have been a part of the United States for generations, and that history can be demonstrated for people to learn about and celebrate in our institutions. We need this desperately today,” said Dolores Huerta. “The only way we can erase racism is through understanding and through knowledge. That is what Latino Museum would create.”

“It is essential that Latinos and Latinas across the country see the role models and icons from their community reflected in our nation’s museums,” said Ambassador Mari Carmen Aponte. “How many today don’t see themselves as part of the American story, when Latinos have served in every war since the Revolution and helped settle more than half of this land 500 years ago? This erasure of our history must end.”

The bill sets into motion the process of establishing a future museum, an important step forward in a campaign that has had bipartisan and national public support for more than a decade. A Smithsonian National American Latino Museum would finally give credence to the history and legacy of a community which represents one-sixth of the American population and is an integral part of both our nation’s heritage and future. Latinos and Latinas have made countless contributions to American innovation and served proudly in every American war, yet their stories are largely absent from Smithsonian museums on the National Mall.

“From our beginnings, we have been a nation of innovators, creators, dreamers, and doers,” said Danny Vargas, Chairman of the FRIENDS board. “The American Latino community has been a part of that story for over 500 years – yet those stories are still not fully represented among our iconic federal monuments and national museums. American history is incomplete without the stories of Latino and Latina leaders, artists, scientists, and trailblazers, which is why we need a National American Latino Museum to educate, inspire, and honor our shared history.”

Latino stories are the most underrepresented in the Smithsonian’s collections—as acknowledged by the institution itself in its 1994 Willful Neglect report, and reconfirmed in UCLA Latino Policy and Politics Institute’s 2018 report, demonstrating a lack of Latino voices and history so severe, it seemed intentional. In 2011, a presidentially-appointed commission to study the potential creation of a National Museum of the American Latino submitted its report to explore the feasibility of a museum. Today’s legislation acts on the report’s recommendations to move forward with the creation of a Smithsonian National American Latino Museum and take an important step towards righting the disparities outlined in the 1994 report that remain.