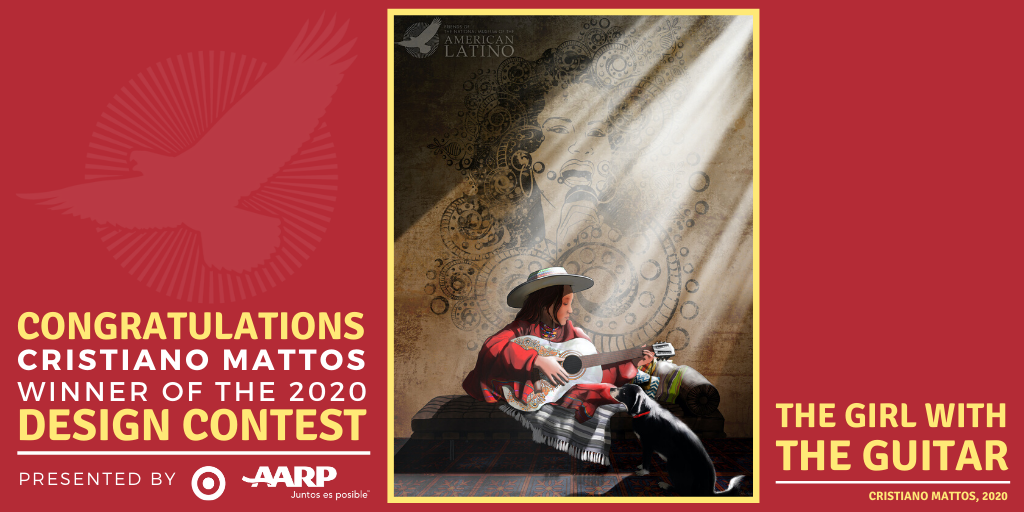 (Washington, D.C.) – Friends of the American Latino Museum (FRIENDS) announced today that Indianapolis, Indiana-based artist Cristiano Mattos is the winner of the FRIENDS’ 9th annual design contest. Presented with the generous support of Target and AARP, the annual contest invites artists from around the country to share their vision of what American Latino history means to them. Mattos’ winning design was chosen among six finalists after a weeklong public vote open to the hundreds of thousands of FRIENDS supporters across the nation. This is the third year that Mattos’ submission has been selected by voters as the winning design.

“As an immigrant and American citizen, I have experienced the great opportunities that this country of ours has to offer. One of them is seeing my artwork recognized nationwide through important organizations such as the Friends of the National Museum of the American Latino, which fights to create a space where the American Latino culture can be represented and appreciated,” said artist Cristiano Mattos. “It’s an honor to have my artwork featured in the campaign for a Smithsonian National American Latino Museum on our National Mall — it gives me the sense that I’m part of the fabric that makes this country a place where dreams come true, no matter who you are or where you are from.”

Growing up in the vibrant city of São Paulo, Brazil, Mattos developed his appreciation for art and design at an early age. He studied media arts and animation at the Arts Institute of Indianapolis, and has traveled globally throughout Europe and the United States to develop and hone traditional and new media techniques. His experiences around the world have heavily influenced his art, citing diversity in the communities he has lived in as a key inspiration for his work.

“Cristiano’s beautiful piece highlights the power of bringing together our multicultural, multigenerational community to better remember and be inspired by our history,” said Estuardo Rodriguez, President and CEO of FRIENDS. “We are grateful to our partners and friends at Target and AARP for making this contest possible, and bringing our supporters together to celebrate our community’s resilience during a dark time for the world.”

This year’s contest received over 50 pieces from artists around the country who submitted their vision for what an American Latino Museum would mean to them. The winning design will be featured nationally in the 2020 FRIENDS campaign efforts to create a Smithsonian National American Latino Museum, including on campaign posters, promotional materials, and FRIENDS digital platforms reaching over 400,000 subscribers. In addition, Mattos will receive a $500 Target gift card courtesy of our presenting sponsors, whose continued support provides an opportunity for FRIENDS supporters to contribute their talents to this historic campaign.