FRIENDS OF THE AMERICAN LATINO MUSEUM WELCOME NEW BOARD MEMBERS 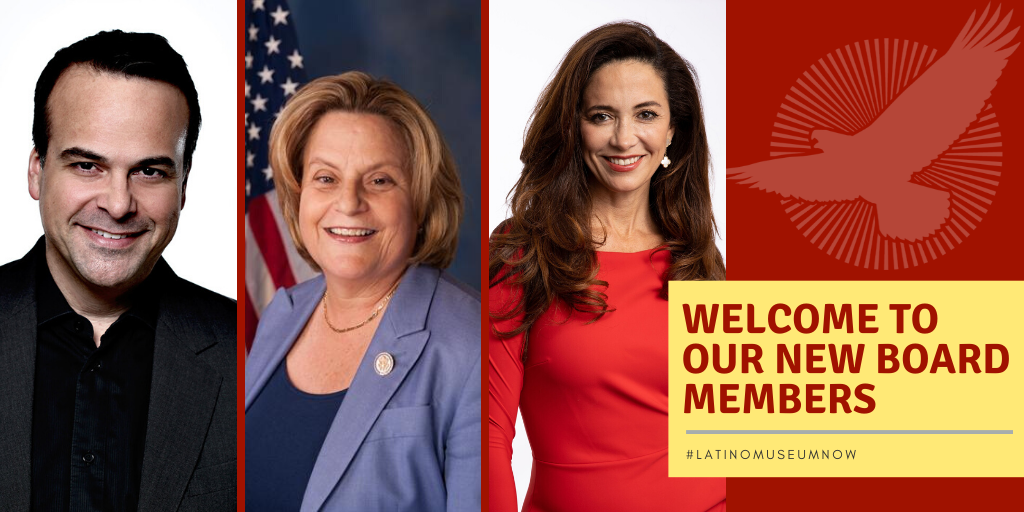 (Washington, D.C.) – Friends of the American Latino Museum (FRIENDS), a national advocacy campaign striving for the creation of a Smithsonian National American Latino Museum, announced three new members of the organization’s board of directors. Former Congresswoman Ileana Ros-Lehtinen, entrepreneur and community leader Jorge A. Plasencia, and global advocate Claudia Romo Edelman have joined the board to advise on development and public affairs during a pivotal year for the campaign.

“We are honored to have these three amazing leaders and advocates join us in our mission to honor the impact and influence of American Latinos throughout our nation’s history,” said Danny Vargas, Chairman of the FRIENDS board. “We look forward to tapping into their combined talent and leadership to get us over the finish line this year with approval of the National American Latino Museum Act.”

Representative Ros-Lehtinen is living proof of the impact of Latinos on American history as the first Latina elected to Congress. She served for almost three decades as a member of Congress representing diverse areas in South Florida, and during her tenure championed the push for a Latino Museum as the original Republican sponsor of the legislation to create a museum dating back to 2004.

“I am thrilled to continue to support this important initiative as a member of the FRIENDS board,” said Rep. Ros-Lehtinen. “From our work in Congress to move this legislation forward in 2004, to reaching milestones today, we are closer than ever to our goal of creating a Smithsonian National American Latino Museum to preserve and celebrate countless contributions of American Latinos for future generations.”

Jorge A. Plasencia has been named one of the world’s top marketing and communications leaders by PRWeek and one of the most influential U.S. Hispanics by Poder. He is the co-founder, chairman, and CEO of Republica Havas, one of America’s leading creative, media, and communications agencies, and formerly served as the corporate vice president and operating manager of Univision Radio and as board chair of Unidos US, the nation’s largest Hispanic advocacy organization.

“The time has come to bring the American Latino Museum in Washington, DC to fruition,” said Jorge A. Plasencia. “The historical, current, and future contributions of Hispanic Americans to the fabric of our nation will continue to run deep, and I am proud to join the board of the Friends of the American Latino Museum in its noble and important mission of making this longtime dream a reality,” he added.

Claudia Romo Edelman is the founder of the We Are All Human Foundation, a New York-based non-profit foundation dedicated to advancing an agenda of equity, inclusion and representation. A Mexican-Swiss diplomat, she has worked on humanitarian causes for 25 years with organizations such as UNICEF, the UN Refugee Agency (UNHCR) and the Global Fund to fight AIDS, tuberculosis and malaria.

“Stories from our community have been excluded for too long from our nation’s museums and history books,” said Claudia Romo-Edelman. “Every American, and future generations, deserves to see the contributions from centuries of Latino and Latina leaders to our great nation; these are Hispanic Stars. Most importantly, these stories and exhibits must receive the same level of exposure and visibility on our National Mall as part of  the Smithsonian Institution of museums in Washington, D.C.”

“For more than a decade our campaign has advanced steadily through the tireless work and volunteer hours of leaders from the civil rights, business, arts and political sectors. We could not have gotten this far without their heart and commitment to this historic initiative,” said Estuardo Rodriguez, President and CEO of FRIENDS. “Our newest board members have demonstrated throughout their careers a passion for lifting up the American Latino experience and we are honored to have their time and commitment. I look forward to working with each of them.”

With over 295 bipartisan cosponsors in the House of Representatives and 27 in the Senate on bicameral legislation, the push for a museum to recognize over 500 years of American Latino history that has been left out of the Smithsonian Institution is closer to reality than ever before.