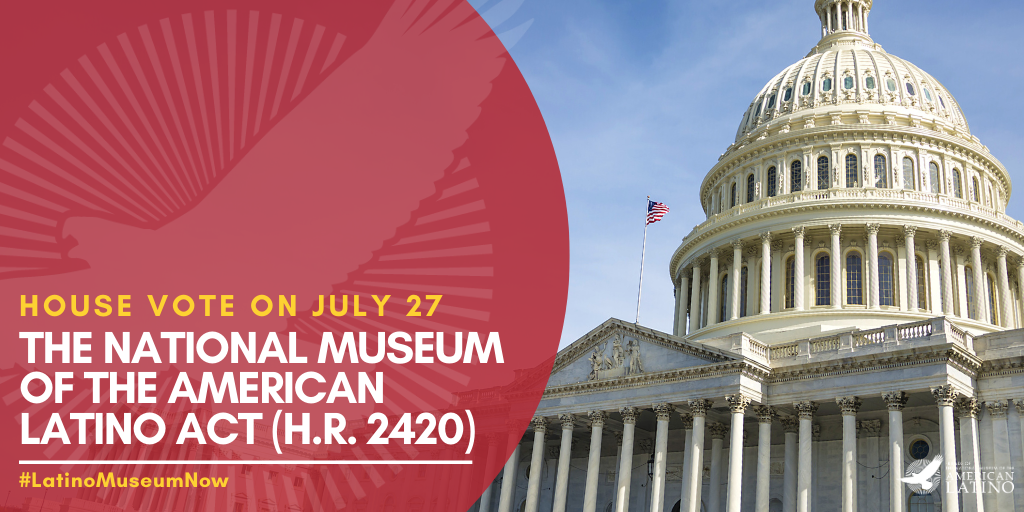 The National Museum of the American Latino Act (H.R. 2420) is supported by a supermajority of 295 bipartisan co-sponsors in the House

(Washington, D.C.) – House Majority Leader Steny Hoyer (D-MD) announced this week that on Monday, July 27, the House of Representatives will advance the National Museum of the American Latino Act (H.R. 2420), which would establish a museum in the Smithsonian Institution dedicated to the preservation and celebration of over 500 years of American Latino history. With 295 bipartisan Members of Congress already in support, the Friends of the American Latino Museum (FRIENDS), the only national advocacy campaign striving for the creation of a Smithsonian National American Latino Museum, urges the full House to support the passage of this legislation.

“For over 500 years, the Latino community has been instrumental in the building, shaping and defending of our great nation,” said Danny Vargas, Chairman of the FRIENDS board. “The time has come to commemorate those contributions in a national museum that will illuminate the American story for the benefit of everyone and serve to inspire future generations.”

“This legislation takes an important step towards righting the ongoing disparities in our nation’s museums that remain today,” said Estuardo Rodriguez, President & CEO of FRIENDS. “The widespread support demonstrates just how important this museum is in filling the gaps in our history. We thank our allies and partners in the House, Representatives José Serrano (D-NY), Will Hurd (R-TX),and Tony Cardenas (D-CA) for their leadership in championing this legislation, and bringing us to historic milestones in our mission to see the contributions from generations of American Latinos recognized in the Smithsonian Institution.”

As acknowledged by the Smithsonian Institution in a 1994 report, Willful Neglect, exhibits and collections of U.S. Latino history are the most underrepresented across all of its museums. The National Museum of the American Latino Act would establish a museum dedicated to representing those stories and figures from American Latino history currently absent from the institution.