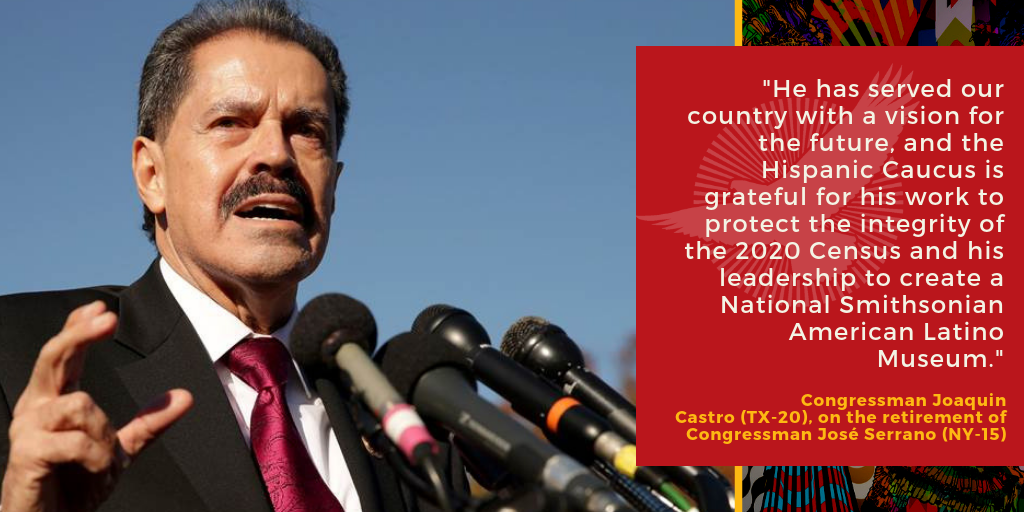 The Friends of the American Latino Museum released this statement following Congressman José Serrano’s (D-NY-15) announcement that he will retire at the end of the 116th Congress:

“A champion for his constituents, the American Latino community, and our nation, Congressman Serrano will be missed upon his retirement at the end of this term. As a member of Congress and the New York State Assembly, Congressman Serrano has served the American people for over 40 years. His leadership and legacy in Congress has paved the way for future leaders, leaving a lasting impact on Capitol Hill.

An original co-sponsor of the legislation to authorize a Smithsonian National American Latino Museum, we are grateful for Congressman Serrano’s commitment to preserving the impact and influence of American Latinos throughout our nation’s history. His personal story beginning in Mayaguez, Puerto Rico and ascending to the halls of Congress over the course of his career exemplifies the need for an institution to share these stories, and we will continue the fight for a National American Latino Museum on our National Mall that will include his legacy.

Congressman Serrano’s strengths as a legislator, mentor, and friend are clear to all who know and work with him. Throughout his years of public service, he has been a steadfast advocate for others, and we know he will face Parkinson’s with the same unwavering resolve and determination that has characterized his career. We take this opportunity to thank him for his service, and we look forward to continuing our work together through the end of the 116th Congress.”