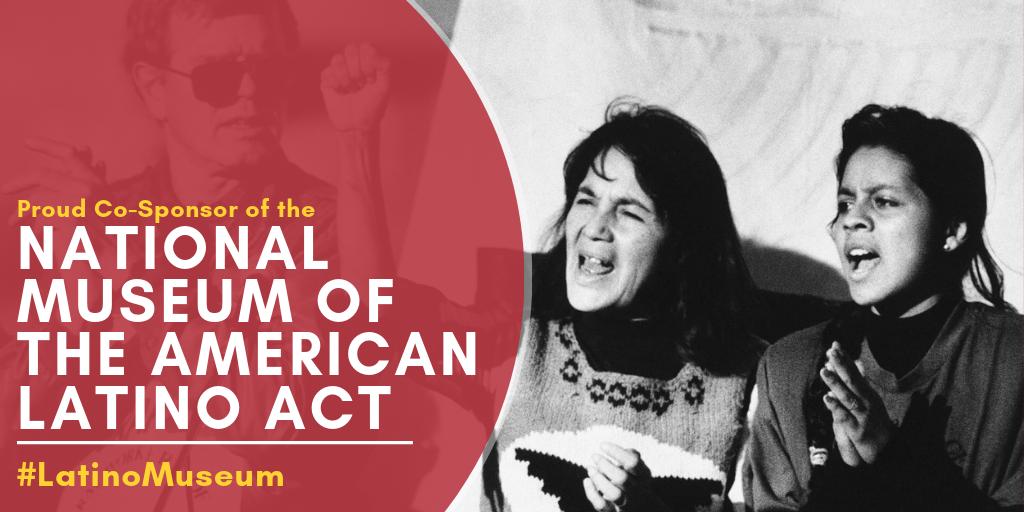 (Washington, D.C.) – On May 1, Congressman José E. Serrano (D-NY), Congressman Will Hurd (R-TX), Senator Bob Menendez (D-NJ), Senator John Cornyn (R-TX), and a group of bipartisan colleagues from the House and Senate reintroduced the National Museum of the American Latino Act. The Friends of the American Latino Museum (FRIENDS) is proud to work with our partners on both sides of the aisle in Congress to advance this important mission of elevating the stories of the Latino community in the United States. The legislation would establish a Smithsonian National Museum of the American Latino on the National Mall, dedicated to honoring the contributions of Latinos throughout our nation’s history.

The bill sets into motion the process of establishing a future museum, an important step forward in a campaign that has had bipartisan and national public support for more than a decade. A Smithsonian National American Latino Museum would finally give credence to the history and legacy of a community which represents one-sixth of the American population and is an integral part of both our nation’s heritage and future. Latinos and Latinas have made countless contributions to American innovation and served proudly in every American war, yet their stories are largely absent from Smithsonian museums on the National Mall.

“It’s unbelievable that we are now in our 25th year of advocating in support of the Smithsonian National Museum of the American Latino,” said musician and campaign supporter Emilio Estefan. “There is no doubt that Latinos have made critical contributions to the foundation and development of this country in the arts and in every possible sphere. All we ask is that the contributions of Hispanics receive the same level of exposure and respect like those seen when you visit the Smithsonian museums in DC. We respectfully request that this bill be passed in this congressional session.”

“Latinos have been contributing to the fabric of America from its earliest days, and yet we still don’t have a place on the National Mall to celebrate these contributions,” said Danny Vargas, Chairman of the FRIENDS board. “It is now necessary and urgent that we establish a national museum to recognize the full picture of American history. Congress has every reason it needs to pass the bill authorizing the Smithsonian National American Latino Museum in this session.”

Latino stories are drastically underrepresented in the Smithsonian’s collections—acknowledged by the institution itself in its 1994 Willful Neglect report demonstrating a lack of Latino voices and history so severe, it seemed intentional. In 2008, a presidentially-appointed Commission to Study the Potential Creation of a National Museum of the American Latino was established to explore the feasibility of a museum, culminating in a 2011 report. This legislation acts on the report’s recommendations to move forward in the creation of a Smithsonian National American Latino Museum, a process that follows closely in the National Museum of African American History and Culture’s footsteps. The bill will take an important step towards righting the disparities outlined in the 1994 report, which a 2018 study by the University of California Los Angeles’ Latino Policy and Politics Initiative concluded still has much to be done.